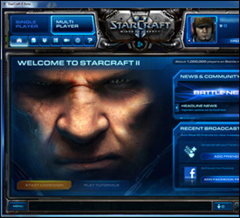 Story
Four years after the events chronicled in the original StarCraft, we find our hero, Jim Raynar, still fighting the good fight against the Dominion (a tyrannical human government) that rules the galaxy's outer planets with an iron fist. The Zerg (a primitive, but ruthless insect-like army) are now on the run as Terran (human) forces pick off their dwindling numbers—but little do the Terrans know that the Zerg are merely playing possum. As the Zerg finally spring their attack, Jim Raynar and company must deal with Dominion forces, Zerg infestations, and Protoss (a psionic race of humanoid alien) relations.

Gameplay
One thing Blizzard does well is make immersive, addicting titles. StarCraft II fits the bill. It's an RTS game through and through; you oversee offense, defense, and various stages of production of military units. The best part is there's no one set strategy that guarantees success; you have to be able to adapt to the changing conditions of the mission and the environment.